Being There by Aarin Richard

Being There by Aarin Richard

What a great movie… “Being There”. One of Peter Sellers’ most brilliant performances in the role of Chauncy Gardner, who was really Chance – the gardener, and who unwittingly finds himself in the most unlikely places and circumstances!! 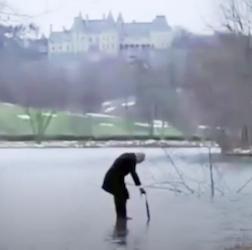 But that is not what this note is about… Maybe a bit closer to “Be Here Now” by Ram Dass, but not quite that either. Please allow me to elaborate.

When I was about 30 years old and a struggling musician, I was, as usual, looking for ways to create a secondary income stream. Somehow, I had gotten the idea to make hand-made leather booklet covers for the old Day Planner appointment / address books we all used to buy at the beginning of the new year. This was well before basic cell phones and personal computers. After making a prototype, I realized I would need a source of wholesale leather.

So, one day I drove to a funky industrialized area of Los Angeles, to a leather tanning facility. There, was a small free-standing building – more of a shack really – that housed all the tanned and dyed hides. I was a complete novice and didn’t know a thing about how any of it worked; if they would sell to me or even talk to me for that matter. Nonetheless, I strolled in, trying to look nonchalant and knowledgeable while I perused the inventory.

An older man was there, more than twice my age, but likely younger than I am now, writing this. He approached and asked if he could help me. I responded in what was surely a vague statement of sorts.

I no longer recall much of the initial conversation. I’m sure I looked uneasy, in what was for me a strange environment. But I do remember, in vivid clarity, one thing he said to me; “That’s some really nice leather on those boots you’re wearing”.

Just a simple phrase. But there, in that moment, an entry was created – into which our real conversation of that day took place… and in many ways, a conversation of a lifetime… with myself.

The words that were spoken that day were not of real significance. Yes, there was a bit of small talk. He inquired about what I was looking to do. And in my questioning, I learned that he was about to retire, in just a few days, to enjoy time with his wife of many years. No – what was of true importance in those moments that day was the essence, which for me still remains vibrant and true! But why?

I didn’t realize it then, nor for many years after, that the old man had made a choice, consciously or not – perhaps intuitively – that he would take a small step forward to   “be there” with me, in the place where I stood – in my awkwardness. Once there, he was then able to “be here now” with his complete focus on me. And that he did, as if I were his long-lost son. But he first had to shift some part of his awareness and energy to get to “there”, as if sliding in a fluid nature to the other side of the fulcrum. Do we all have this ability – to flow through a likely unconscious decision point to be present with someone and meet them where they stand in that moment? I think we do but how does it become not just a practice, but a way of being? You see, how we get to “there” is what I’m trying to unravel here.

Over the years, and really much later in life, I’ve aspired to adopt this way into my own consciousness – in a Zen-like, intuitive, subconscious way, as it seemed to be for my old friend. Most often however, I mumble, bumble or simply neglect to meet the moment. Yet it remains a guiding light, with nothing to achieve other than to simply walk the path… the one of connection and compassion. And perhaps that’s the answer to my question of “how”: just simply walk the path. When I think of the people who have had an impact on my life, the old timer always comes to mind. Someone I met only once, who gave me a gift – a template for a way of being in this world… an aspiration.

And likely for him, it was just a conversation and moment he never thought of again. In reflection, that’s not so surprising. We’ve all had a friend tell us ”You know that thing you said was of such importance to me…” to which we have no recollection. Perhaps there are times when we merely serve as conduits – a delivery mechanism through which spirit speaks to its intended recipient. And in those times, we can “be there” as the open channel, not always privy to the import of our words – just present.

We meet the Buddha in the humblest of places. Inside that little shack in East LA, in just 30 minutes, I received a master class – in the interpersonal ways of being. And little did I know then that the lessons from that day would take a lifetime to complete. The inspiration from that old timer, so long ago, remains a reminder of something for me to aspire to – Being There.